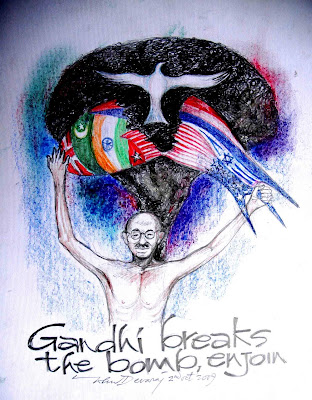 The Bornfree Art school will celebrate the birth of Mahatma Gandhi on the 2nd October 2009at 10 am in front of the Town hall and in the environs of the sculpture park of Ravindra kalakshetra, JC Road, Bangalore.

1 There  will be a dramatic presentation of Gandhi breaks the bomb by the children of Bornfree Art school.

3 Ms Mioi Nakayama of will render the Article 9 of the Japanese constitution  which prohibits from maintaining armed forces., that which is the direct translation of the values of Ahimsa taught to us by

4 There will be songs and talks by liberated peace loving children of the Bornfree.

The Nuclear warheads proliferation of the world has reached an intolerable self destruction peak of causing wide spread poverty, hunger and the creation of 246 million working a children of the world.. Half of them are in India.! Every tenth Indian is a working child.150 million children in will not reach the 7th std said the prime Minister.

That is because there is no money for education , but abundantly available for war.

spends 23142.22 crores on education and Rs 141 703 crores on defense to even an ever increasing budget.10 nations in the world have stockpiled 23 000 nuclear war heads capable of destroying the earth a million times., depleting its resources bringing about a climate change unfit for human survival.

The Practise of Ahimsa and Non violence is the only solution to the alleviation of Indian poverty, hunger and illiteracy.

The Bornfree undertook the Peacebycycle in 2008 on the theme from to one ore one heart. Pedaling 2800 kms this was called the second Dandi March. Gaja 9 year old student of the Bornfree was the leader of the expedition. We made salt at Dandi to commemorate the values of Ahimsa .7000 letters of love were collected from the children of  written to the children of , which will be read on  Gandhi’s 140th Birthday

Posted by Bornfree Art School at 9:27 PM No comments:

Gandhi's Children against the Bombs 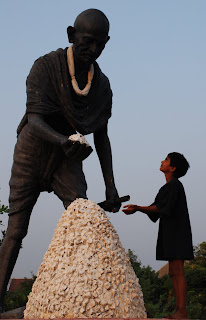 The Bornfree is organizing a street performance on the birthday of Mahatma Gandhiji, on the 2nd of Ocboter, 2009. The Atomic Bomb is eating children and nuclear-armed nations are killing them. Children of Mahatma Gandhi will be reviving out of destruction and become Rainbow Warriors to change the world. We will be staging in front of the Town Hall, JC Road on this day. We have to create costumes, masks, postcards, puppets of bombs,etc . We would like to invite you all for this performance to remember Ahimsa~Non Violence that Gandhiji taught us. We will play music, hold exhibitions of Hiroshima and Nagasaki, and do a procession till the City Market. Please come and help us to create. Preparation will be on the 30th Sep from 4 pm, 1st of Oct 2pm at the back of the Ravindra Kalakshetra.
Posted by Bornfree Art School at 7:46 PM No comments: