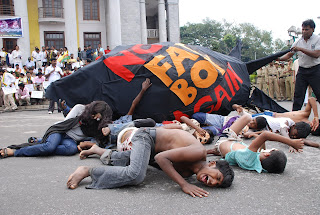 "We want Gandhi, we don't want Hitler! We don't want bombs, but we want pencils." So did the children of the Bornfree shout and appeal! The Bornfree children have staged "No Fat Boy Again" at the Town Hall, on the 2nd of October 2009, remembering the140th birthday of Mahatma Gandhiji. John Devaraj has created the actual size of the bomb ( FAT MAN ) which was dropped on Nagasaki. Children carried this huge bomb on their heads. One of the actors, Subramani, 15, stated to the public, "Our nation is spending too much money on wars and creating atomic bombs, but 134 million children like us have no access to schools. We want pencils in our hands."

India has now 17 nuclear reactors out of which, 7.7 % is concentrating in Tamil Nadu. Dr. Pugazhandi who is running his own clinic in Kalpakkam, 60km from Chennai, has noticed the pandemic of cancer cases among his patients.  He has been finding the facts of the strong connection between the leakage of Radioactive Iodide from the Kalpakkam Atomic Reprocessing Plant and his cancer patients. At Kalpakkam, the media has reported that babies without legs and arms are being born, which is closely due to the leakage of the Power Plant. Maximum life of nuclear reactor is 40 years, but resulting waste will remain for 48,000years. The Indian Government has entered the new foreign nuclear relationship with the US Government, aiming to create 25000MW by the year of 2020. However, the question of safety remains unsolved. ( Reference; Press Release by the NAAM). http;//nfijounal.wrdpress.com

Mr. E P Menon has joined our performance. He is the ever peace lover of India. At the age of 24, he started to walk from Delhi to appeal the disarmament of nuclear weapons among nations. He walked up to the Indo-Pakistan border but at that time he had neither a passport nor a visa. He has written a letter to Mr. Nehru in 1962 and Nehru has sent a passport to Menon after sometime. However, Menon crossed the border without a document with a huge welcome from Pakistani people. Pakistani President Ayub Khan has publicly announced his peace journey in Pakistan. "Everywhere i was welcomed by the people. That time there was no political conflict between India and Pakistan. They are all our brothers and sisters." After Pakistan, he went to Afganistan and Russia. When he entered Paris, the French Government arrested him and put him in jail for four days. Then, he proceeded to London, America, finally he went to Tokyo. His final destination was Hiroshima, reaching on the 6th of August, the day when the Atomic Bomb was dropped on. He walked with 7 Japanese young people from Tokyo to Hiroshima. In August 1964, his journey of 10,000km was completed. He came back to India and wrote about his journey. The book is called Footprints on Friendly Roads, which is yet to be published in India. 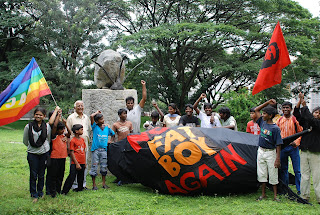 Now there is a big peace movement by the National Alliance of Anti-Nuclear Movement (NAAM) by the people. The Bornfree Art School is also joining this wave and as young people and children, we will work on this nuclear issues. E P Menon said that when children participate actively in the peace movement, will be there a big change in the world.