Gaja goes back to the school~Latest News 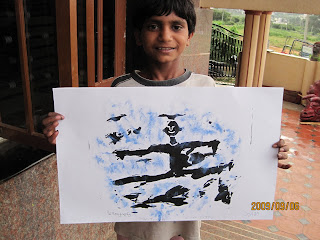 On the 20th of October 2009, after having been in the Bornfree for the past one and a half years, Gaja started to go to the formal school, Parikram school in Jayangar, Bangalore. Sold for the price of Rs.500 by his parents, he came along with 25 Bihari bonded labour children to work in the bag company in Bangalore. He had been stitching school bags for five years, being in the dark inside of the factory near Magestic. One day he hailed from the owner and came to the city station nearby where he met Elisabeth who brought him to the Bornfree. The journey of his success has started; joined the gymnastic classes at the Stadium, after a year, he is now representing Karnataka in the gymnastic competition. He joined several informal education schools. Everywhere he goes, his interests in learning are unlimited. He is extremely interested in dance, theater, drawing, painting, music apart from gymnastic. He wakes up at 4 am, leaves home at 5 am to go to the class. He may miss breakfast, but not a gymnastic class! Recently, John has taken him to the Parkram, which runs ICSE based education. Of course, he became already well-known among all kids because he did saumersauts! He wrote the exam and passed! Today was the ever first day of his schooling. His dream is to go back to Bihar to meet his parents one day...... He is currently working on a dance piece called "Two Little Crown" about circus children of the streets. He is going to stage on the 14th of November, Children's Day, at the Lalit Ashok Hotel.