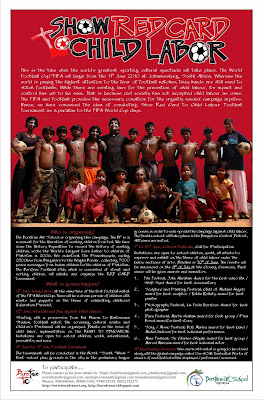 Show Red card to Child labour
11th June~11th July 2010
This is the time when the world’s greatest sporting cultural spectacle will take place. The World Football Cup~FIFA will begin from the 11th June 2010 at . Whereas the world is paying the highest attention to the fever of football matches, tinny hands are still used to stitch footballs. While there are existing laws for the prevention of child labour, its impact and control has yet to be seen. That is because civil society has not accepted child labour as crime. The FIFA and football provides the necessary condition for the urgently needed campaign impetus. Hence, we have conceived the idea of conducting Show Red Card to Child Labour Football Tournament as a parallax to the FIFA World Cup days.
Who is organizing?
The Bornfree Art School is organizing this campaign. The BF is a movement for the liberation of working children from toil. We have done the History Expedition to record the history of working children, wrote the World’s Largest Love Letter to children of in 2006. We undertook the Peacebycycle, cycling 2800kms from to the Wagha Border, collecting 7000 peace messages from Indian children to the children of . The Bornfree Football Club, which is consisted of street and working children, will initiate and organize the RED CARD tournament
What is gonna happen?
11th June; Inauguration at the same time of the first football match of the FIFA World Cup. There will be a dream parade of children with masks and puppets on the theme of celebrating childhood {Liberation Parade}.
12th June; International Day against Child Labour;
Starting with a procession from Bal Bhavan to Kanteerava Stadium, football match, film screening, cultural events and Children’s Parliament will be organized. Debate on the issue of child labor, implementation on the RIGHT TO EDUCATION. Invitations are open to school children, youth, educationist, journalists, and more.
11th June to 11th July; Football Tournament
The tournament will be conducted in the North ~South ~West ~ East school play grounds in the city in the preliminary league rounds, in order to wide spread the campaign against child labour. The final knockout will take place in the Bangalore Central District. All teams are invited.
1st to 30th June; Cultural Festivals; Call for Participation
Invitations are open to school children, youth, all artists to express and exhibit on the theme of child labour under the below sections of arts. Deadline is 30th of June. The results will be announced on the 11th of July at the Closing Ceremony. Each winner will be given awards and mementos.
1．Film Festival; John Abraham Award for the best video film / Shafi Syed Award for best documentary
2．Sculpture and Painting Festival; Child of Michael Angelo award for best sculptor /
Kathe Kollwitz award for best painter
3．Photography Festival; La Frida Bornfree Award for best photographer
4．Dace Festival; Marta Graham award for best group / Pina Bosch award for best story
5．Song / Music Festival; Bob Marley award for best band / Michel Jackson for best individual performance.
6．Mime Festival; Sir Charles Chaplin award for best group / Marcel Marceau award for best individual actor
7．Essay and Poetry Festival; Anna Frank Award for best literary work
11th July; Closing Ceremony; this one-month match is going to be closed along with the global campaign called One GOAL final match. Works of winners of each festival will be displayed / performed / screened.
To participate....
Please contact us for more details by
Email; bornfreeart@gmail.com, johndevaraj@gmail.com, narendranathv@gmail.com, sandeepviswanaath@gmail.com mioinakayama@gmail.com
Phones; 9886306366, 9886011830, 9740128128, 08022183275
http://www.bornfreeart.org, http://bornfreeart.blogspot.com
Posted by Bornfree Art School at 8:02 AM No comments: