To remember Japan Tsunami ~ From India with love 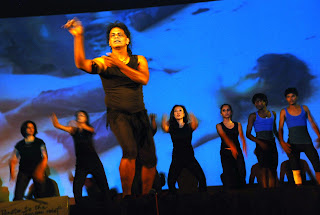 The Bornfree Art School has staged "Shiroi Hana" on the 27th March 2011 for fundrasing for tsunami victims of Japan. Within the short period of practice time and with new dancers and actors, we were able to stage Shiroi Hana-White Flower, which is about the Hiroshima atomic bombing. With an audience of about 200, along with the Team Peace Challenger, the Bornfree has raised funds and issue of atomic bombing through the theater on the day of the World Theater Day. 11 Japanese women who visited us have shared their real experiences when the earthquake hit their areas. Maki said that "When i was at home, i felt the biggest earthquake in my life and i was always told to hide under the table when such thing happens. But i had a second thought of outside is safer than inside or vice versa." The voices of the Japanese reached the audience, which touched their hearts.

Dr. Cheeranjivi Sighn as a chief guest has inaugurated "I AM HOMELESS" and "Art for Japan" exhibited by John Devaraj. He has been photographing the homeless in such as Japan, Chez
Republic, Germany and India. His exhibition is also dedicated to the tsunami victims.