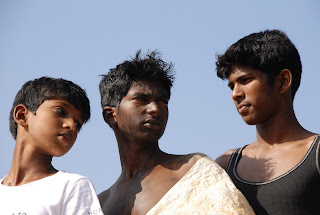 Ananda is a new film production which the Bornfree is currently working on. It is a biography of all our children~Anand, Gowri, Gaja, Srinivas D, and many more. It is a two-hour-future film. All children are acting in this.

a biographical film on  street kids.

Ananda is a biographical work on a  street kids. Ananda, having been sent out of school worked as a tender coconut chopper forced into this job by his drunken father. Unable to do his homework, he is battered by his teacher. He runs away from school. Joins a bar and restaurant, learns drinking and smoking from his adult customers.

He sees his father among all the drunks; one day he smashes a glass of alcohol on the ground gets kicked out of his job. As he is walking away, he sees a petty shop, He looks at the sweets and is going for it when he sees the cash box open. He grabs as much change as he can , when the man shouts “thief, thief…”, he runs and runs but gets caught. He is jailed. He becomes a confirmed thief. When released, he meets a gang of kids, In the meeting they share their histories.

Ananda now a veteran of many thefts spots a bag full of shining objects in the compound. He scales the wall, grabs and runs. They are real  empty brass bullet shells meant for guns It was an auxiliary unit.  of  an ammunition factory

Ananda sells the bullets for its brass value As he walks across a grave yard, a rival gang bashes him up and grabs all his money.  He is subsequently arrested. When he comes out of the jail Ananda realizes crime does not pay. He tries to change his friends through dance, art music. He changes fist fighting feuds to artistic challenges, dancing, sports, drumming, stilt walking, painting, rock climbing. Soon a beautiful culture of freedom and liberation is discovered. As they are moving on in life, they meet a sculptor who is turning a stone into a beautiful figure of art.. He  brings them together through their own talents. Some become painters sculptors, Dancers etc

They are now cycling and enjoying a new found freedom and they are seeing places. On Republic Day, 26th January, they visit a air show of the Nation. They joining the thronging thousands and shocked tp see a whole lot of guns, war planes, blatant display of killing instruments.. The scene in frightening!. Bullets and missiles and every shape and size ready to kill. Half a million people are applauding and cheering the thrilling flying machines.

They are angry. As the planes go up and down, they are catching them in the sky and breaking them.

There is flashback of their lives. The scene is frightening. Bullets and missiles and every shape and size ready to kill. Half a million people are applauding and cheering the thrilling flying machines They want to change this!  No money for schools, all the money for war. As they return they stop near a factory and workers agitating for better wages It is a spring factory making springs for AK47 guns! Ananda who is the greater criminal me that stole empty shells or those make real killing instruments, the merchants of death. They are more determined to change it. They decide to free all working children from toil. They want to express this  Art music and Dance. To produce a culture of liberation. And they become talented Artists. Students Gaja has become a Gymnast. Santhosh is Moon walking with his horse, Prashanth a sculptor.

Ananda and Durga have joined a ballet school and are dancing to music Ode to Joy.

The Making of Ananda

The Bornfree Art school will produce the film through a cooperative venture..This through small contributions from Children, Youth and people who believe in the cause of Children’s Liberation. The film will be made on a HDV format. and a reverse tele cine { RTC} conversion made in 35 mm film format for purpose of showing in cinema houses and festivals.

We appeal for your support.

Contributions by Cheque  in India to

Looking forward to your support