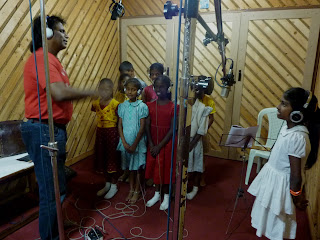 ZOU RESHA-Elephant Train has started chugging ! It is a new theatrical dance production by the Bornfree Art School. It is based on the true story about the preciousness of animals's lives and peace during and after the Second World War in Japan and India.

In 1938, the four elephants were shifted to the Nagoya Zoo from Kinoshita Circus and they were so famous for performing in the zoo. By the time, Japan had started to occupy the Asian countries whereas the lives for the people were also under the threat by the bombing by the US Army. The Zoos were ordered to kill animals especially, ferocious ones like bears, cheetahs and elephants. Animals also had less amount of food and day by day the tension between the Army and Zoo rose up. The curator, Mr. Kitao tried to steal food for the army horses for the dear elephants. At the end of August 1945, after the bombings in Hiroshima and Nagasaki, Japan was destroyed completely.

The  process of democratization, Japan had children's parliaments everywhere. Children of Tokyo had voiced that they wanted an elephant in the Tokyo Zoo! They learnt that they can see two elephants who survived in the wartime are still living in Nagoya. So, they went and pleaded to give them an elephant! But the elephant was too weak and thin to be shifted! One of children cried out....

The officials of Japan Railway got to know that children of Tokyo wanted to see an elephant, so they had arranged the express special train called "The Elephant Train"!

The then Prime Minister, Nehru got to know that children of Japan wanted an elephant having seen letters written by them. Nehru said, "Let's gift a baby elephant, and she shall be called Indira"! Two curators from Mysore had accompanied along with a baby elephant to Japan. On the way, children of Asia traveled with Indira and got on the Peace Elephant Train....

Bornfree Art School will present "Zou Resha-Elephant Train" in February 2011. It will be the puppet show with the style of contemporary dance, jazz, ballet, Indian classical dance and kalaripayattu (Indian martial arts) combined with gymnastic techniques performed by the professional and amatuer dancers, musicians, street and working children.

This is a collaborative production with Aichi Chorus for Children's Happiness and Peace, Nagoya. Mr. Fujimura and Ms. Yamaguchi along with other three members had visited us and helped John Devaraj conceptualize the Zou Resha in November 2010. Today it is the 1st day of music recording where more than 20 musicians have gathered.

We are looking forward to taking this production forward all over in India, Japan and Europe. Photos; http://picasaweb.google.com/bornfreeart/ZouResha#